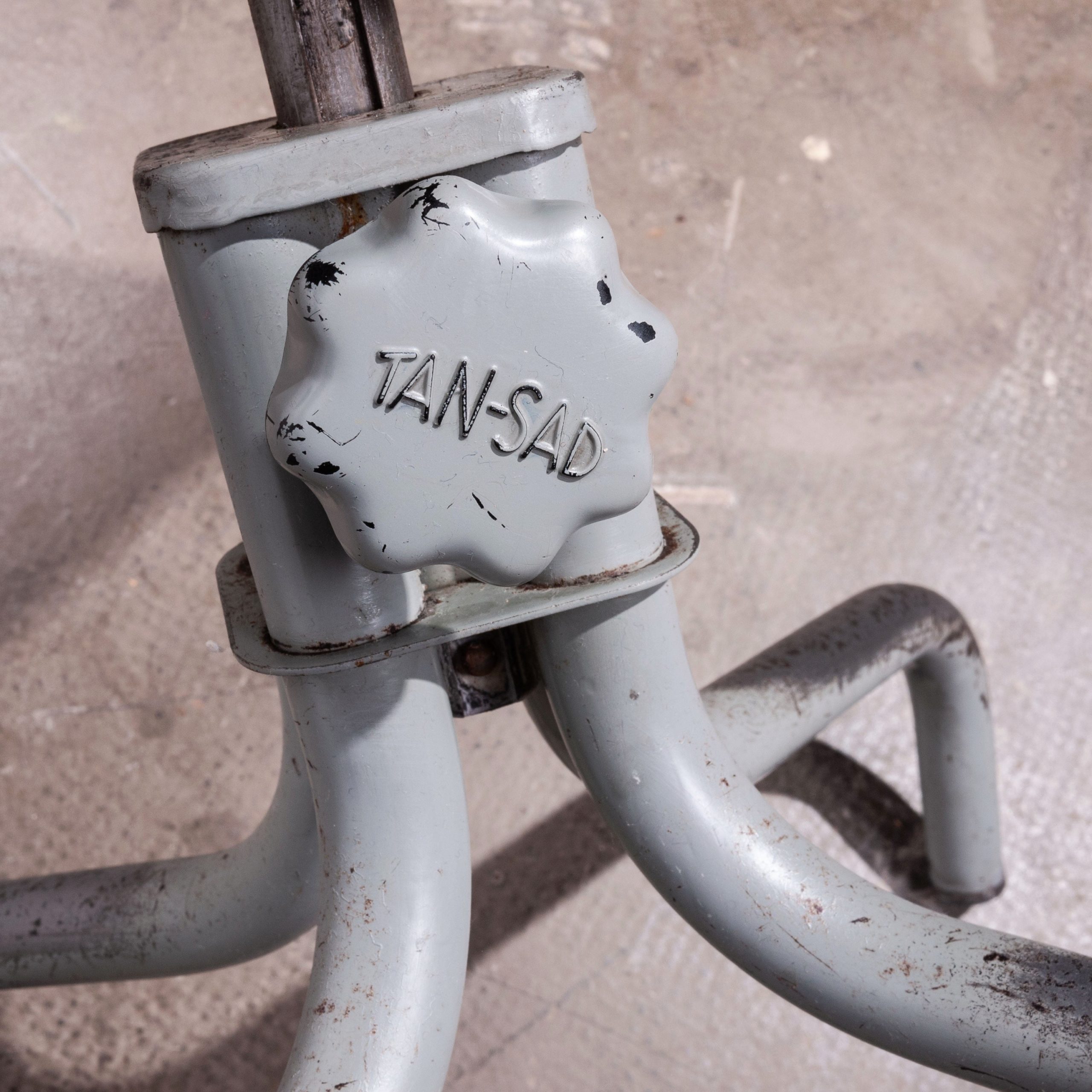 Tan-Sad began life in 1922 in Birmingham and was first publicly listed as an exhibitor at the British Industries Fair, selling typists tables, constructional toys, motor cycle chairs, perambulators and office and factory chairs. Tan-Sad Continued to grow over the coming years and essentially split its Birmingham production between push chairs and toys, and a very successful range of factory and office seating.

In the 1950’s and 1960’s Tan-Sad became a generic name for pushchairs and traditional perambulators before it’s demise in 1975. Ask a certain older generation and they will still to this day refer to a pushchair as a ‘Tan-Sad’. The original meaning behind the name is believed to come from the French word Tansad, meaning  the extra or pillion seat behind a horse or motorcycle. Sadly little more than this is known about Tan-Sad except for various vintage advertising and of course vintage products that have survived. Our interest lies mainly in the iconic machinists chairs that were mass produced from the 1930’s onwards, competing head on with Evertaut in England as well as a number of big European manufacturers.

The machinists chair was born from the use of industrially produced steel tube that post the First World war was produced in such scale that it became a key new material in furniture production. The Bauhaus school was one of the pioneers of its commercial use in seating. The early Tan-Sad chairs are iconic in their use of vulcanised cardboard for the seats and backs. A tough and practical material that was suited to the harsh environment of the factory floor. With no fabric upholstery it could be cleaned with a damp cloth, was fairly resistant to fire, and yet would gently mould to a comfortable shape.

We have been lucky to recently come across a batch of early machinists chairs in exceptional condition and are able to pick out the key highlights from the early 1940’s production. The seats swivel and are height adjustable using a basic locking screw and pin that wedges into a channel cut into the seat upright, as time progressed (in the late 1950’s) this system was updated and the seat swivelled and adjusted on a threaded base, reducing cost by (sadly) removing the need for the lovely Tan-Sad branded adjusting handle. The seat bases were originally made from welded steel but this too was replaced with a mass production cast base in the late 1950’s. Interestingly throughout these changes the original and highly practical vulcanised cardboard remained as did the lovely rubber bumpers used behind the curved back rest to cushion the attachment of the backrest to the main frame and allow some movement.

Our interest lies mainly in the machinists chairs of which many varieties exist although the model shown below is the best know. Very occasionally you will see an original 1920’s horse hair stuffed and upholstered version, if you do, snap it up it’s a rare part of our industrial heritage.

Help us champion recording the history of these iconic industrial brands. If you can help us in our mission please get in touch!